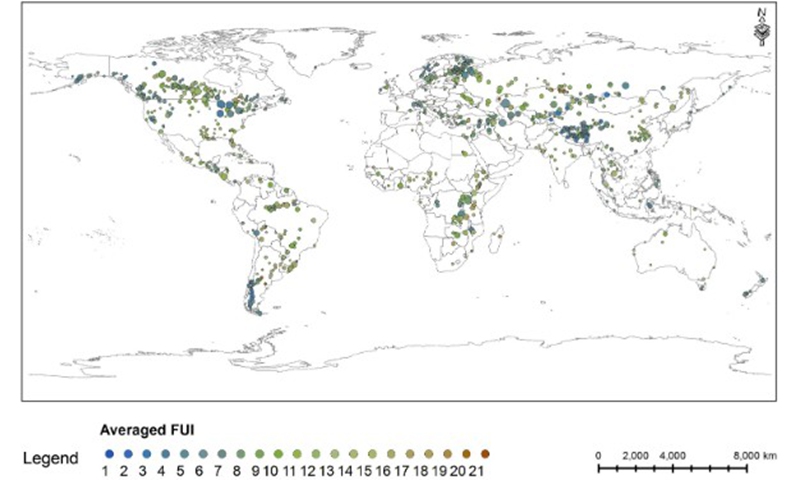 Average FUI of global large lakes and reservoirs Photo: Courtesy of Zhang Bing
A recent study found that the water of 70 percent of the 165 large lakes in China has become clearer in the past 20 years.
The study, conducted by scientists at the Chinese Academy of Sciences (CAS), observed and recorded the color and transparency variations of the worlds' 1,049 large lakes and reservoirs with an area of 25 square kilometers or above between 2000 and 2018.
The water in 71 percent of the 165 Chinese lakes it monitored became clearer, with 36 percent "having a remarkable change" in terms of water clarity, said Zhang Bing, leader of the research team and a research fellow at CAS' Aerospace Information Research Institute.
The domestic lakes with the most significant increase in clarity are mainly located in the western Qinghai-Tibet Plateau, Zhang said. The rise of local water levels and improvement of the surrounding ecological environment has probably contributed to the increase, he added.
"The Forel-Ule Index (FUI) of Nam Co Lake on the plateau, for instance, dropped from 4.4 in 2000 to 3.9 in 2018," Zhang told the Global Times on Thursday, saying that the lake's water transparency had increased by more than two meters in this period.
The FUI indicates the color variability and quality change of natural water, ranging from 1 to 21, with 1 being best and 21 worst.
The study also found the water transparency of some lakes and reservoirs in eastern areas had a slight improvement in the past 20 years.
The FUI of the Xin'anjiang Reservoir in East China's Zhejiang Province, also known as the Thousand Island Lake, decreased from 8.1 in 2000 to 7.4 in 2018, and its water transparency grew by 0.2 meters, Zhang said.
"The mild growth shows that China's efforts in water pollution prevention and control have to some extent worked, especially under the background of rapid urbanization and industrialization in the past decades," Zhang said.
In general, the water transparency of the lakes in China's western areas is higher than that in the eastern regions, the study showed.
Many lakes with relatively low water clarity, a FUI higher than 12 and transparency of less than 0.5 meters, are located in the northeast, as well as the middle and lower reaches of the Yangtze River, according to the study. "That was partly due to the eutrophication of local water, or the amount of sediment or organic matter the water contains," Zhang explained.
Globally, the water in 69 percent of the 1,049 large lakes and reservoirs under the study had become clearer between 2000 and 2018. Only 31 percent, mostly distributed in arid areas in the world, was less transparent.
The study was based on remote sensing satellite images and global water quality databases, as well as years of field observation and data collection by Zhang's team. Its research result was published online in January in Scientific Data, a scientific journal under Nature Research.